Qiskit is an open-source quantum computing development kit developed by IBM and the community check it out here It's been almost a year since I became a Qiskit Advocate. I did write a blog for Fayz last year but that was a bit general in the topic you can read it here. This blog is going to be a bit more quantum-ish journey.

Qiskit Advocates is a global program by IBM where they support and mentor individuals who are active in the quantum computing community. Advocates are part of a group who receive all the latest information in quantum computing, advocates also get invited to all the latest Qiskit events happening worldwide. The best part of it is that you get recognized by a lot of people in the community and get to meet a lot of people around the world. I am part of the first batch of Qiskit Advocates and to get selected I had to pass a test on quantum computing and Qiskit, moreover, I needed to have contributions to the community. You can read more about the Advocates program here.

So how did I get into quantum?

The first time I heard about quantum computing was when my high school teacher mentioned about it during a class, he told us it was a kind of computing fundamentally different from the way we compute and it had the power to solve problems which were so hard that our usual computers were incapable of. This sparked an interest in me and I began reading on it, but to be honest, all I understood was that quantum computers could take a bit of information process it in a way such that it can speed up computation, yeah that was it. I even wrote a blog which was kinda copied from the wikipedia article at that time. The real journey started by the end of my first year in college, I was getting bored of making websites and wanted to try out something different and that how I went quantum again after writing that old blog in high school.

I began reading a lot on quantum computing and eventually stumbled upon Qiskit, there wasn't a qiskit textbook back then so I learned about quantum computing by going through the tutorials on GitHub, it was a bit hard starting, actually that's when I realised I needed to have an understanding of the theoretical aspects of it. I found out about a researcher in Kerala who told me to check out the book Quantum Computing and Quantum Information. So I bought the book and started reading it. I still had a lot of doubts while getting started with Qiskit, so I cold emailed IBM and they introduced me to Madeleine who helped me with resources to learn and even helped me started with contributing to Qiskit. I got to know of the Advocates program and applied for it. I found the advocates test to be one of the best resource to learn too, I learned a lot about qiskit while doing the test. And that was how I started with quantum computing.

The journey so far

After becoming a Qiskit Advocate a whole new world opened up to me, I met a lot of people who are very active in the community, people who are passionate about research, coding, teaching etc. The initial few months I still kept on learning about quantum computing because I had this feeling I was not ready to start teaching others about quantum. In Februray 2020 I got an opportunity to do a talk about quantum computing and qiskit in my college. The session was organised by the IEEE Student branch and I introduced the basics concepts to everyone, even thought it was a small audience I felt happy seeing my name on a poster they made for the event. 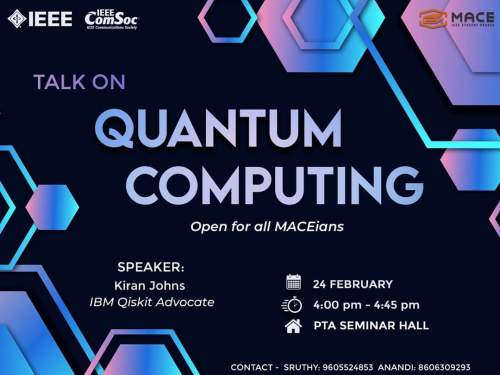 After this event, I realized that I needed to focus on my speaking skills. I learned to convey topics like superposition and entanglement by connecting it with an example based on two coins spinning. This session also helped me understand how I can convey the matter to which the students can relate to.

The second event I was invited to be a speaker was for a program named Venus organized by the IEEE Kochi hub on International Women's day. This was my first event as a speaker outside the college. The audience comprised of 80+ college students. I talked about how quantum computing is fundamentally different from classical computing, it's applications, most of the students were surprised when they came to know that they could program real quantum computers via the cloud. 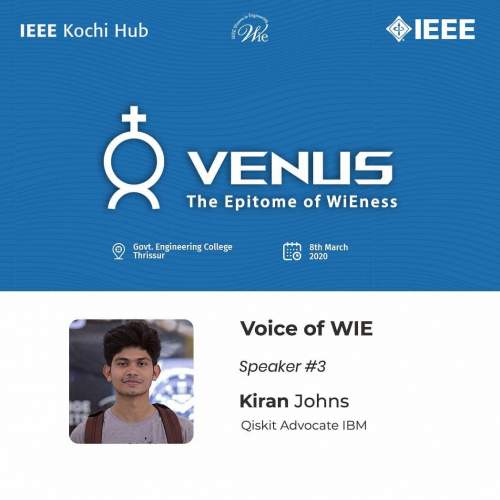 I talked about qubits, the physics concepts, introduced the circuit model of computation. I was happy that the audience had a lot of interest in this field. 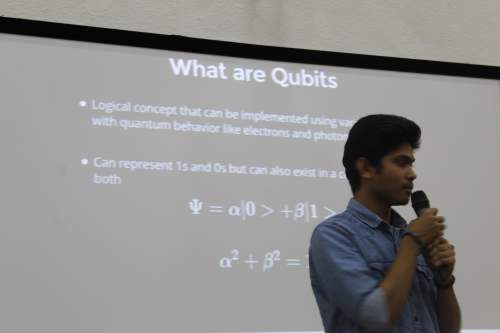 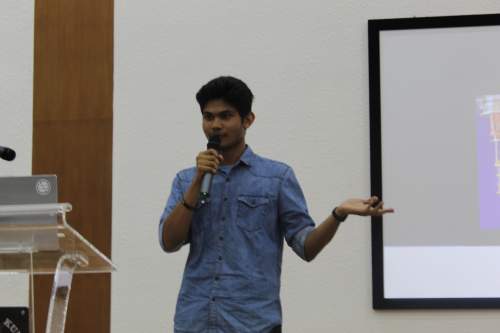 By this time I met a few students from other colleges who were also into quantum computing, I met Abishek, Augustin, and Tom and we decided to start a community called Cirqle where we share information about quantum computing. We're still a small community but we have a lot of active people having discussions and sharing knowledge.

The first time I took an online session was in April. I got invited to be a speaker at an event named Altered organized by a college in Kerala 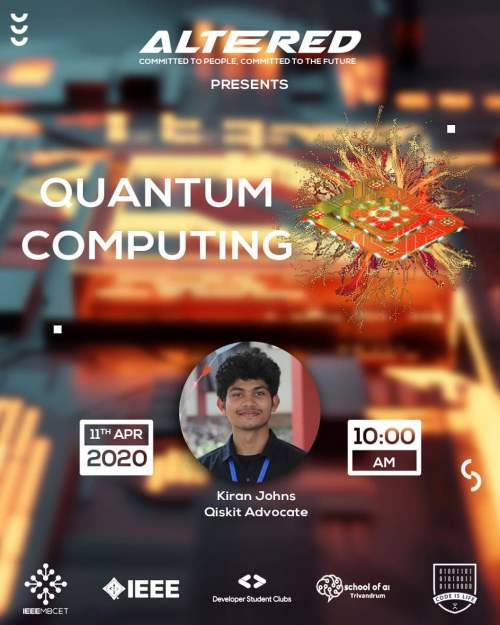 I was surprised that there were over 120+ participants for the session, To be honest, I was a bit nervous too. I spent a few days before planning on what I was going to talk about. I decided to start at the basics and eventually show the participants to create a circuit using IBMQ Experience and Qiskit. The fact I realized after this session was that, it was best to narrow down what I was going to talk about in a specific area. Define your objective first, if your objective is to teach them the math then speak only about that, there is no need to get into coding.

Later in April I got a chance to take another session, and later that week I got an email from a student that he needed some more guidance in learning quantum computing.

Contributing back to the community gives you a lot of happiness and joy. Even though you expect nothing in return, small messages in emails that you recieve makes you a lot happy and that is what I love about the community. "Sharing is caring". I even got more opportunites to contribute to Qiskit like designing questions for the Qiskit India Challenge, and volunteer as a mentor for the same.

From an introverted kid to speaking on stage, Qiskit has helped me grow as a person as well as helped me to enhance my skills, and it's been a wonderful journey so far. Meeting people in the community who inspires you definitely helps you to become a better human being.